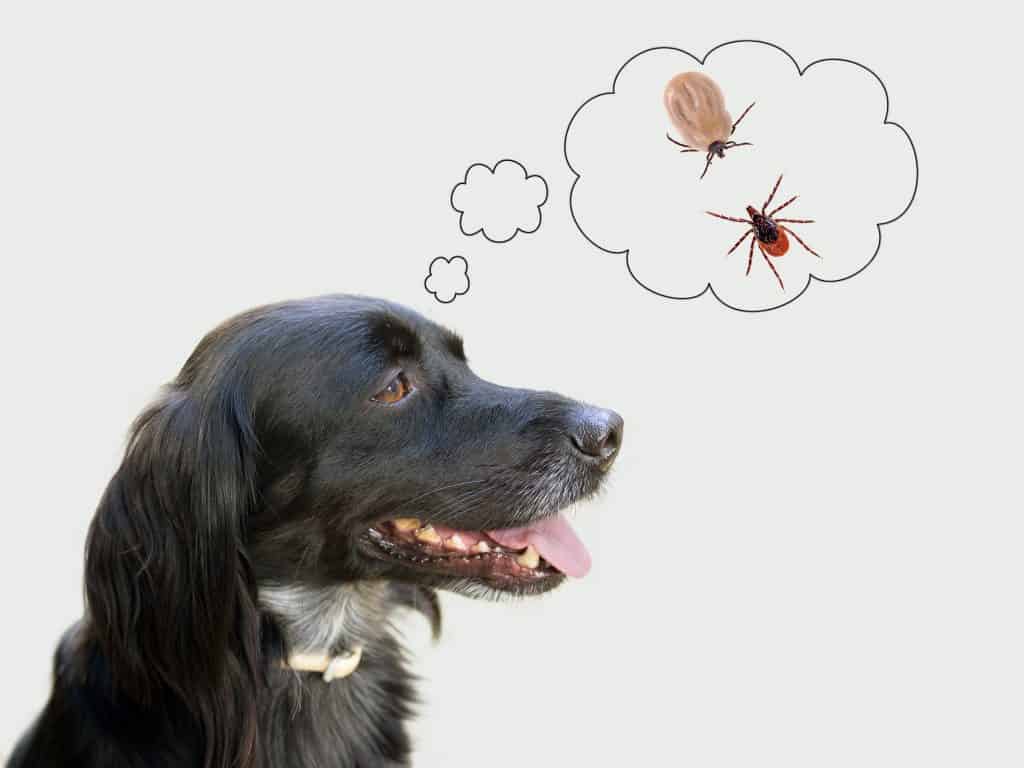 Even if you are practiced at tick removal, accidents do happen. When done carefully you should be able to remove the entire tick, however, it’s very common for the entire head or just the mouth portion to remain in the dog’s skin when a tick is extracted. Here, I’ll go over how to remove tick head after body is gone, to show you some safe methods you can try.

While it can sound easy to remove the entire tick during the extraction, a tick head stuck behind is fairly common. First things first, don’t panic. Once the body is removed the tick is dead, which means it’s not going to be able to regurgitate its stomach contents into your dog which is what will cause an infection or the transference of disease.

Some people believe that leaving the head behind isn’t an issue. However, even though there is a lowered risk of infection, most pet owners will still want to get the head out in order to prevent a secondary infection or general skin irritation.

If you’re squeamish, then you may want to ask a friend or family member to assist during this time or have them take over altogether.

If you’re lucky enough that there’s a small portion of the head sticking out then you can try using tweezers, or you can try removing the head using the tip of a hard plastic credit card.

If you’re using a credit card, then you’ll need to use the corner of the card against the edge of the head. Next, you’ll push down into the skin in order to attempt to get under the end of the head and build a little leverage. The whole point of this method is the fact that it will not cause increased inflammation in the area and it will not increase the risk of infection. If this method is not successful then you’ll need to try a more invasive approach. 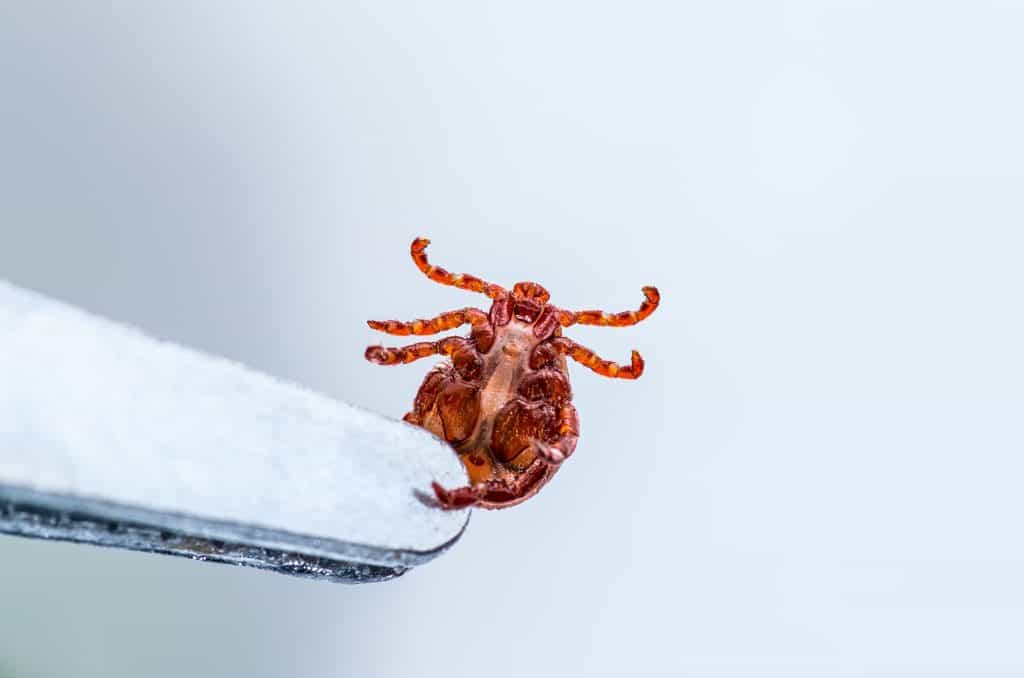 This method is similar to removing a splinter, however, unlike a splinter which is usually a small piece of smooth wood, the tick head features very tiny barbs, which is what helps it to remain embedded in the skin. However, using tweezers to pull it out is definitely worth a shot. If this technique doesn’t work within the first couple of tries then you’ll want to move on to a different approach since this can cause severe irritation and inflammation to the area.

Before you attempt to remove the head make sure you sterilize the tweezers by first washing them in warm soapy water, rinsing them off, and then wiping them down with rubbing alcohol. Gently grasp the part of the head that’s protruding from the skin and be careful when pulling it out as you can end up just breaking off part of the head. If there is no part of the head protruding and the head is entirely under the skin, then you’ll need to gently pierce the skin using a sharp sterilized needle.

If you try the tweezer method with no success and you do have a scalpel on hand, then you can try removing the head using this technique. However, when using this method you must be very careful and ensure that you’re using a sharp blade. To do, you’ll gather the area of skin between two of your fingers gently. Next, scrape the edge of the blade over the entry point of the head. Remember, you want to scrape not cut.

The purpose of using this technique is to remove the top layer of skin opening it so that the tick head will pop out. At this point, tweezers can also come in handy in order to provide some extra assistance in pulling the head out. If you don’t have any tweezers on hand, then you can gently squeeze. This pressure should be enough to dislodge the head.

If you’re dealing with a tick head that is particularly stubborn, or you’re searching for a less invasive way to remove one, then using epsom salt is a good solution. This salt can come in handy for a variety of different things. Because of this, you should always keep a bag in the home. One of the downsides to using this method is that it will take a couple of days to work. Epsom salts will work by drawing out toxins from the body, so it makes sense that they can slowly but gradually draw out the head. To use this method, you’ll dissolve the salt in warm water. Once dissolved, make sure you check the temperature of the water. It should be lukewarm.

Grab a cloth and soak it in the salt. Apply the wet cloth to the affected area and hold it in place for 10 minutes. You’ll repeat this treatment three to four times a day until the tick head is removed.

When to See the Vet 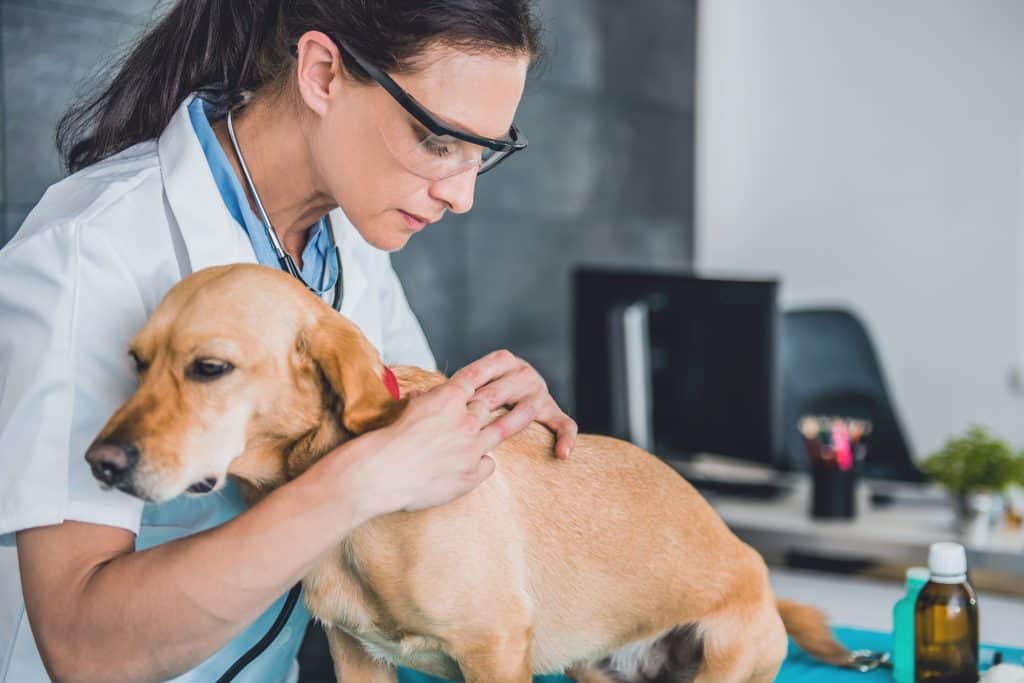 If you have tried all of these methods with no success you have one of two options. You can allow nature to take its course and let it expel the head naturally, in its own time while keeping a close eye on the area for any signs of infection, or you can take your dog to the vet. However, if you’re concerned about infection or your dog has abnormally sensitive skin then a trip to the vet may be worth it. A vet is highly trained and used to removing foreign bodies from the skin, so this procedure should be over within a matter of seconds.

There’s actually a tool called Tick Pliers that is specifically made to remove ticks from dogs. These pliers are pretty affordable and if you live in an area where there as a high tick population then it’s a worthy investment. These pliers work by removing the tick at the surface of the skin which can prevent the injection of the tick’s stomach contents into the dog when you’re trying to remove it. The pliers have a raised edge so the entire tick is captured when removed. These pliers will work on all animals and even people.

How Not to Deal with an Embedded Head

Whatever you do, don’t use square-headed or bulky tweezers. While you may think that this type of tweezer is better than nothing you’re actually doing more harm than good. If you try to remove a tick’s head with this type of tweezer you may accidentally squeeze the fluid-filled body which can lead to serious illness or infection.

As you already know, ticks carry a variety of diseases. Depending on what part of the country you live in ticks can carry Rocky Mountain spotted fever, cause tick bite paralysis, or Lyme disease.

Because of this, it’s important to watch your dog for any signs of illness which can indicate they may have been infected. These signs can include:

If your dog shows any of these signs then I recommend contacting your vet immediately. While there’s a good chance your pet will be fine, many of the diseases ticks carry are very nasty and should be addressed immediately. Last of all, prevention is the best cure.

Another annoying thing for your dog are fleas. Learn how to get rid of them by reading my full article on the topic!

Remember, it’s very important to move from one method to the next if you’re not successful with the first two attempts. This is because you want to avoid irritating the skin at all costs, which can lead to a rash or swelling and increased pain. If you’re not comfortable removing the tick on your own, then ask an experienced friend, or you can make an appointment with your vet.

By following these steps you will help to significantly reduce the chances that you’ll have to deal with another embedded tick head. Learning how to remove tick head once body is gone can help to prevent a secondary infection and skin irritation. However, even if you do take the proper precautions, it’s important that you regularly check your dog for the presence of ticks. The sooner the ticks are removed the lower the chance of the transference of disease.

You can find out more about which cookies we are using or switch them off in settings.

This website uses cookies so that we can provide you with the best user experience possible. Cookie information is stored in your browser and performs functions such as recognising you when you return to our website and helping our team to understand which sections of the website you find most interesting and useful.

Strictly Necessary Cookie should be enabled at all times so that we can save your preferences for cookie settings.

If you disable this cookie, we will not be able to save your preferences. This means that every time you visit this website you will need to enable or disable cookies again.